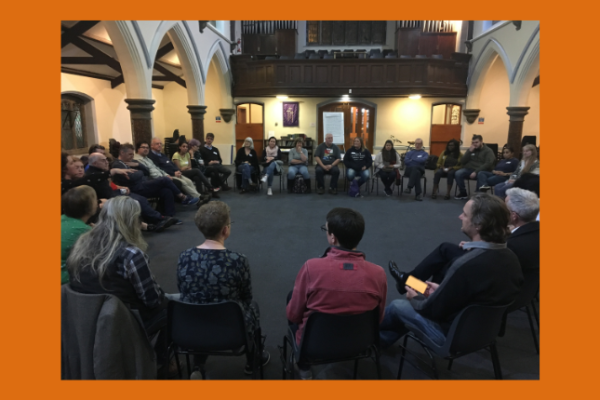 We’ve tried something new in south Birmingham this year: two ‘B30 Get Together’ evening events.

Our aim was to forge stronger ties between community groups and volunteers in the area. We organised the events alongside Councillor Fred Grindrod, with support from Bournville Village Trust and the host venues.

We held the first event in June, at the Church of St Francis of Assisi in Bournville, welcoming 35 attendees from established and emerging groups, alongside residents expressing an interest in ‘doing more’ locally.

MP for Birmingham Selly Oak Steve McCabe came along to support. “Initiatives that develop from local people really make a difference to our communities,” he said.

Through a speed networking exercise, attendees were able to chat to at least 20 other people they’d never met before. People said afterwards they might have felt daunted had they known about the format in advance, but that it had been a hugely positive experience. We were impressed by the way everyone threw themselves into the task.

It was “well organised and a very economical way of doing it” said one anonymous respondent. Another said: “I liked bringing groups and residents together, the chance to share what we do and to discover groups I didn’t know of and form links, swap contacts”.

In October we held a second B30 Get Together, this time at the Cotteridge Church, attracting nearly 40 attendees. To break the ice, we supplied two large ward maps and asked people to plot the community projects and groups they knew about in the area, share their wishes for the community, and discuss barriers to achieving them.

For the last part of the evening we gathered in a huge circle to explore ways we can all work more closely together. Ideas that arose included referring volunteers to one another’s groups, making use of at-risk community buildings for events, and supporting regular community activities – such as Bournville Lunchtime Concerts at the Friends Meeting House.

Afterwards we circulated the names, groups and contact details of those who were happy to share that information – as well as flagging up which groups are in need of volunteers.

We asked everyone the question: where would you like to go with this? Watch this space to see what they said.

Feedback from October’s B30 Get Together

“I found it very useful to find out what was happening and what people’s concerns are on a hyperlocal basis. I also made several promising connections.”

“Thanks for a great event.  It was great to meet other people who are thinking about remedies for lonely and isolated people in the local area!”

“These events are good but the energy will peter out if actions do not develop”.

“I can only say I think it is brilliant what you’ve started. Communities meeting up socially with the common bond of volunteering/ doing good for the community is what I think the country has been missing for decades. I hope it becomes a regular thing, perhaps at each meeting one group giving a more detailed account of what their group does, as well as any important updates from other groups and requests for other volunteers. I really hope the concept spreads throughout Birmingham and the country.”

In a world where we’re often under pressure to collect empirical data on the outcomes of our work, it feels good to record less tangible results – the little sparks that fly off when you bring people together; that are almost impossible to catch in a spreadsheet.

After hearing during our October B30 Get Together that St Nicolas’ Place in King’s Norton is under threat of closure now the church can no longer fund it, I decided on the following Saturday to take my family to the café for lunch. There I bumped into two members of Our Cotteridge who’d had the same urge to show their support. We all admitted that without the B30 Get Together none of us would have known that the community-run buildings (the largest collection of medieval buildings in Birmingham) were at risk.

As a result of the event I joined the Facebook groups for Our Cotteridge and the Bournville chapter of Amnesty International UK. I’ve been a shamefully quiet member of the latter for more than a decade, and knowing meetings take place in my neighbourhood makes me determined to get active.

At the October event Jo Burrill, our new Development Coordinator, strengthened existing connections. She and Jess Allan from Bournville Village Trust had a happy moment discovering they’d volunteered on the gate together at CoCoMAD in July.

Jo also met someone she has known socially for years. “I realised he has this ‘other life’ in community action!” she said.

After the event Jo was able to link another friend up with SEND Socials – a community group creating social opportunities for children with special educational needs and disabilities – in time for the school half-term holiday.

Jess said she experienced several little sparks after our June B30 Get Together in Bournville.

“This included making links with Citizens UK for the first time, then attending one of their taster workshops. Now Bournville Village Trust is seeking to be a member of Citizens UK,” said Jess.

“Also that was the first time I met ROAM [a local project to help children experience freedom outdoors] – and connected our youth worker with them”.

Did you have any B30 Community Moments after attending our events? We’d love to hear about them: email info@birminghamcommunitymatters.org.uk and we’ll share them here.

PrevMeet Jo Burrill, our new Development Coordinator
‘Everyone has something to learn’ … including us!Next